Ever Wonder What Windshields Are Made Of? 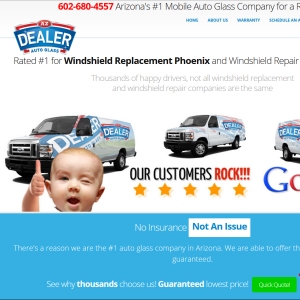 You might love your car and appreciate its purpose, but there is a big chance you never stopped and looked at your windshield. If somebody would ask you “what is a windshield made of?” you’d say simply “it’s made of glass”. The see-through object in front of you car is not just a piece of glass. It is a safety object that protects you from wind, rain, dust, rocks, debris. If there was no windshield, particles of dust (especially where we live in Phoenix, Arizona) would get into your eyes and make you weep why no one ever invented the windshield. Beside this, if there was no windshield, you would be severely hurt in even minor accidents. Now that we made sure you understand the practical importance, let’s see how windshields became what they are today.

History of the Windshields

As we have said, it is not “just glass”. Although glass has been used for over 7000 years, glass alone is not the best protection. First windshield was invented in 1904. First windshields were made of plain glass and this hasn’t shown to be good choice. Glass windshields were easy to shatter and therefore were not safe. Tempered glass was harder than regular and this was second choice of manufacturer. It was a better choice, but jet, not the best. Over the years numerous accidents have shown that this still is quite fragile and that windshield production needs improvement. This improvement came in shape of laminated glass. Windshields before laminated glass were fragile and this extra layer in between gives windshield the flexibility and is crucial for safety of the passengers.

Laminated safety glass is the best car industry could give us so far. Two layers of glass and one plastic layer of poly-vinyl butyral in between them are maximum of safety provided from where we stand. Maybe in ten years they will invent something more resistant, but for our century, this is the best we can get.

What is glass made of? Glass consists of soda ash (Na2 CO3), dolomite ((CaMg)(CO3)2), cullet, silica sand (SiO2) and limestone (CaCO3). Small quantities of potassium oxide and aluminum oxide are often added. This is an interesting process which includes “Float method” of making the windshield. Glass is made of water and the elements we mentioned before – silica sand, soda ash, dolomite, limestone and cullet. These are melted at extremely high temperatures and mixed with water. After the “float chamber” with molten layer, it is transported on rollers. Glass cools down gradually and is later cut using diamond tools, since diamond is the hardest rock mankind knows and edges of these cutters are very precise.

In later process, windshields are made of this glass and the special plastic layer we have mentioned above. They are shaped and come in many different sizes. They can be tinted and with special sensors. To find out more about the process of windshield making, visit Youtube.com and watch some of the great industrial videos on “ how its made” topics.

See how much to replace your windshield
Get a Quick Quote

How to Defog a Windshield? It’s Super Easy!

How to Remove Water Spots from Auto Glass – Correctly

What are 3 Piece Wheels – Cast and Forged Wheels